Here is the last part of our series of interviews conducted during the Dakar Bitcoin Days forum. Emmanuel Harrault, well known on social media for his contributions on cryptocurrencies, had made the trip especially to share his vision on Bitcoin (BTC). 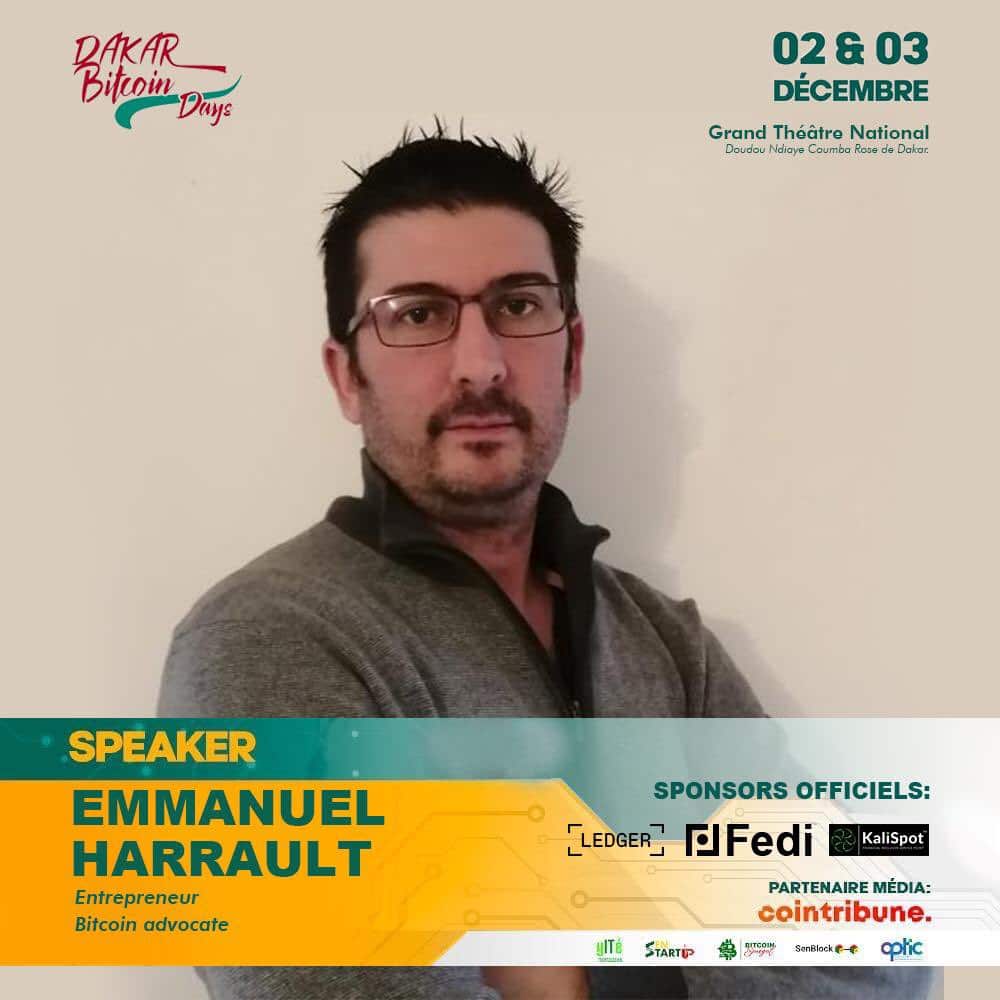 Hello Emmanuel, could you introduce yourself and explain why you became interested in Bitcoin?

I come from a generalist engineering school, then I was a physics-chemistry teacher for eight years and now an IT project manager.

In 2017 I had speculative lure, the curve was crazy. I had never invested in the stock market, but there, it was simple to do, I put in a very small ticket. Then in 2018, it collapses, I turn away from it, convinced that it was a bubble.
It’s in 2019 that I really look into it. I see that the price is still quite high and I don’t understand why. It arouses my curiosity and I decide to read the Bitcoin white paper. The engineer’s gaze then understands that I am in the presence of a real technological revolution. We can now transfer value on the net without an intermediary. From there, I dig. And I quickly understand that it does not only offer a simple means of payment but a whole monetary system. I then realize that I know nothing about my currency, the euro.

I discover what I would call a real house of cards. For my scientific side, fractional reserves, creation from credit, derivatives, shorts, shadow banking etc…, I don’t understand how it can work. At least I realize that this system is out of breath and will eventually burst. And that the real alternative is Bitcoin.

What does Bitcoin represent for you?

Over time and my research, I realized that the impact of Bitcoin is much greater for many countries in the world than for us Westerners.
I am also aware of the stranglehold of rich countries on poor countries. Colonialism is not over, that’s very clear.
But before, I thought that we only maintained our grip thanks to our “advances”. The reality is much sadder. The very operation of monetary creation and the organization of the banking system is adapted to our needs, not to those of the rest of the world.
Bitcoin is hope. The hope of seeing a world a little fairer. Money, monetary creation, is the most powerful power in the world. This power, from my point of view, should not belong to any country, any organization.
I wish emerging countries understand this and embrace bitcoin. Westerners will be able to vary the price of Bitcoin, when it is converted into Fiat. But they cannot change the fundamentals. This is a gigantic step forward for many countries that are still under the influence of those who hold the printing presses.

Finally, a short message to all those who would like to be interested in it. It is not in a few days that you will be able to understand all the ins and outs of Bitcoin. It’s been almost 4 years for me and I continue to discover.

In the current economic context, do you think that Bitcoin can be a real alternative to traditional Fiat currencies?

So current context or not, as I said just before, I think the fundamentals of Bitcoin look a lot stronger to me than the monetary model. So the answer is yes. To the question of whether Bitcoin will be stronger, or a better store of value over time, I don’t have a crystal ball. I have absolutely no idea. It can depend on so many things in the world. On the other hand, my feeling is that when I compare this Fiat monetary system that we have with Bitcoin and look at my finances currently, I have more confidence in the future of bitcoin than confidence in my own currency, l ‘euro.

So I could just advise to learn what it is and then everyone will make their own choice. No doubt to diversify its investments a little. Because our current economic model is not tenable and at some point there is a very good chance that, if it does not collapse, it will very violently fall apart.

The current Bear Market and the FTX affair have tarnished the reputation of cryptocurrencies. Is this detrimental to Bitcoin and its adoption?

That’s excellent news ! So, it will seem strange, provocative, to say that… Excellent news, especially if we make a comparison with what happened for the subprime crisis and the central banks in 2008. At that time, the monetary system classic wavered. We felt that there was a problem. As a result, the central banks finally took the decision to launch the rescue operations. The result is that we have gone from bad to worse. And our economies found themselves in a terrible, extremely serious situation, because they finally decided to save the banks, the banking system, when it should undoubtedly have collapsed.

FTX is a whole system that could not be saved and could not work if abused, which is done a lot in the classic system. Well suddenly, the person has done anything with the customers’ money, well, we don’t actually save it. People have learned it in spite of themselves, it’s terrible for them. But FTX is everything Bitcoin doesn’t want to be. It is the exact opposite of Bitcoin. And there, I think that those who write about cryptos, blockchain or Bitcoin have a duty in relation to this: it is to inform people. The exchanges must just act as an intermediary to be able to obtain cryptos.

From what you saw there, how do you judge the future of Bitcoin in Senegal?

It is a very difficult question. For the simple and good reason that this is the first time I have come to Africa. As a result, my vision of what can happen here is quite limited. On the other hand, it is clearly hopeful to see an organization like the Dakar Bitcoin Days set up in a country whose bitcoin adoption rate is not very high. It is a wonderful hope. Me, I see people who are interested and try to understand what is happening. What is bitcoin? Why ? What could it be used for?

My little experience, even if it was very short here, was still interesting. I wandered around a bit with a few setbacks, but I had the opportunity to meet people. And the ease of approach allowed me to try what is called “orange crusher”. That is to say, put the little orange pill in people’s heads so that they are interested in it. And the reaction is not at all the same as the one we can have in France. If I do that in France, people tell me “ah, Bitcoin, speculation, I don’t know, no, I don’t want to hear about it”. People aren’t even curious. In fact, they don’t know what it is, and they don’t want to know more. It is absolutely terrible. We feel a kind of big propaganda.

Whereas here, when each time I did it, people were attentive to listen to me. That’s what gives me a lot of hope. Because I think there are monetary problems here, with the CFA Franc. The influence that France may or may not have is a problem anyway. There is also the problem of small change which is often very rare. People still need to know that if you go to a store and buy something, you give a ticket. But we don’t always give you change, it’s often very complicated. Instead, we’ll give you vouchers.

So I think people are much more sensitive to the problem of the cost of money, they understand it quite easily and they are more curious. They have no prejudices, we can clearly feel that. And so that is a great hope for me. Because it means when people can learn, that’s Bitcoin’s path to success. I keep saying it, it’s my little slogan: “Learning is understanding”.

A quick word about your projects in 2023?

I am going to be very sincere, I have absolutely no idea, for the simple and good reason that I am an IT project manager in a box in France. I freed up 20% of my time to devote myself to learning more, digging, offering my services. I have a few companies who asked me to do consultations, I gave a conference in school. I don’t know if I know how to sell myself very well or not, but in any case, I continue to learn all the time.

There, I follow Alyra’s training in blockchain consulting because I wanted to have a certification of all the skills and knowledge that I had already acquired and to deepen them with this training. Here, I will go over the opportunities. I don’t plan on the comet. I have children and I also need to ensure financial stability.

To find the previous interview carried out as part of our series dedicated to the Dakar Bitcoin Days forum, this is where it happens!

Receive a digest of news in the world of cryptocurrencies by subscribing to our new service of newsletter daily and weekly so you don’t miss any of the essential Cointribune!

Computer entrepreneur and resident in African lands for fifteen years. In this uncertain and wavering world, I see bitcoin and cryptos as one of the best opportunities in the face of the challenges ahead.

How to Develop a Bitcoin (BTC) Wallet

You may have missed