Midas Investments, a platform that allowed users to earn passive income on their cryptocurrency holdings via DeFi returns, announced it was shutting down its operations due to unforeseen circumstances beyond its control. The company suggests that the collapse of FTX and Celsius, as well as other devastating events so far in 2022 would have made it impossible to continue operations under normal conditions. The company also added that it would charge 55% on most customer accounts to “balance assets and liabilities”.

Midas Investments is a CeDeFi platform, i.e. a hybrid platform that combines centralized finance (CeFi) and decentralized finance (DeFi). CeDeFi offers DeFi products such as yield farming, lending, borrowing, liquidity staking, and token swapping, which are available on DeFi protocols while being regulatory compliant. According to industry players, CeDeFi addresses the lack of regulation in the crypto space. It would do so by complying with regulations that help law enforcement agencies identify potential criminals in a more direct way.

CeDeFi is also characterized by centralized entities that use governance structures similar to those of the traditional financial sector, but embrace the efficiency of decentralized finance, thereby reducing costs. Last Tuesday, Midas Investments announced to its clients that it would close on December 27. I am writing to you today with a heavy heart to announce that the Midas Investments platform is closing,” wrote Iakov Levin, CEO of Midas Investments, who also goes by the name “Trevor,” in a December 27 blog post. He claimed that the platform fell victim to the winter in the market in 2022. 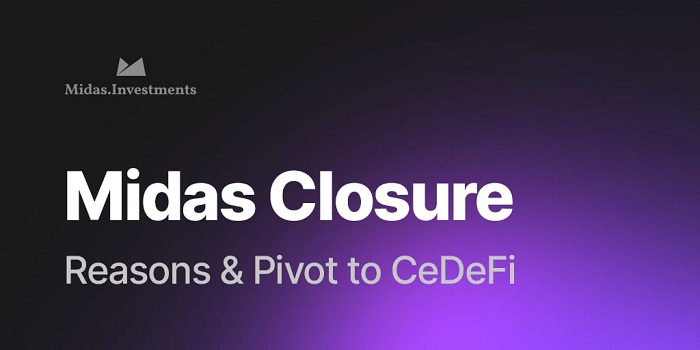 Levin said that in the spring of 2022, the turmoil in the cryptocurrency market saw Midas’ DeFi wallet lose $50 million off its market value of $250 million, or 20%. Then, following the bankruptcy of Celsius Network on July 13 and that of FTX on November 11, “the platform experienced the withdrawal of more than 60% of assets under management (AUM), creating a significant deficit in ‘assets’ of $63.3 million, based on assets of $51.7 million against liabilities of $115 million in BTC, ETH and stablecoins. According to him, the situation no longer allows us to move forward.

Based on this situation and current CeFi market conditions, we have made the difficult decision to shut down the platform,” Levin wrote. He reckons his team has spent the past eight months trying to find ways to balance assets and liabilities, including “launching CeDeFi strategies, fundraising and exploring opportunities with DeFi protocols” . Despite these efforts, large withdrawals due to the insolvency of Celsius and FTX, coupled with reduced return opportunities in the market, made it impossible to cover daily payments to users due to the asset shortfall.

Levin said only Midas C-suite executives were aware of the asset shortfall, and marketing, support, IT and platform teams were unaware. The asset shortfall was caused by the long-term risk of DeFi investing, the instability of our business model after the loss of assets, and the illiquidity of the Midas token,” he said. In the blog post, Levin also outlined his company’s plan to balance assets and liabilities. To begin with, from December 27, deposits and swaps were disabled on the Midas platform.

Midas explained that it will then deduct 55% of the balances of users with more than $5,000 in their accounts, as well as rewards earned by all users. Withdrawals will be disabled for 2-3 hours while we ensure balance calculations and adjustments have been made correctly. Once this is done, you will be able to withdraw the remaining assets from the platform, with the rewards earned being deducted from your balance,” he wrote. Levin also said that users would receive MIDAS tokens equivalent to the deductions as compensation.

These tokens will then be exchanged for the tokens of Midas’ next project, which he then described. In January, Midas will focus on market research and prototyping DeFi and CeDeFi business models, as well as creating prototype votes and strategies and developing new investment processes. In February, the team will continue market research and begin investment traction, working on developing a minimum viable product and engaging with DeFi protocols,” Levin wrote. He said private testing of the product will be done in March.

And in April, Midas plans to swap the current tokens for the new tokens. Levin held an AMA (ask me anything) session with Midas customers on YouTube on Thursday, and it started with a mea culpa. I know it was really hard for you, and I’m incredibly sorry it came to this. I take responsibility and try to explain what happened. “I understand that doesn’t give you back the money you lost with Midas, I understand that you want to burn everything Midas related now, and I obviously accept that,” he said.

Levin said he was responsible for vision and decision-making and made “huge mistakes” as CEO of Midas. I was incompetent, and with my team, we were incompetent in the management of funds. “We didn’t understand the impact of having $300 million that we got in March,” he said. Meanwhile, after recently revealing how it plans to reimburse users, DeFi platform Defrost Finance has finally broken its silence on accusations of carrying out a ‘rug pull’ after the recent exploit that cost $12 million. the platform.

The Defrost team said a compromised key does not equate to a “rug pull”. In other DeFi news, Mango Markets hacker Avraham Eisenberg was recently arrested and charged. In a complaint made public on December 27, the FBI accused Eisenberg of fraud and securities manipulation. In addition, Sam Bankman-Fried, the founder of FTX, agreed to post $250 million bail for his release. He is assigned to his parents’ home in California pending the start of his trial for fraud. He faces 8 counts.

What is your opinion on the subject?

Sam Bankman-Fried, founder of crypto exchange FTX, agrees to post $250m bail, and is assigned to his parents’ home in California pending the start of his trial for fraud

Sam Bankman-Fried and other FTX executives received billions of dollars in secret loans from Alameda Research, according to Caroline Ellison, former managing director of Alameda Research

After NFT Market Crash, Historic Crash of Cryptocurrencies, Native Token of FTX Platform Plunges 80% and Drags the Entire Market Down

Sam Bankman-Fried moved $684,000 worth of crypto assets while under house arrest

You may have missed